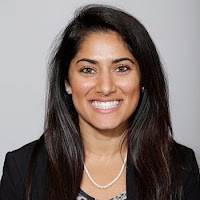 When deciding on a business school, the quality of companies who choose to recruit on campus makes up a large part of the criteria students evaluate. The Kelley Corporate Relations Team pulls through in big ways, bringing in names like 3M, Bain, and Amazon that most students will end up working for. It’s an ideal situation: these companies are looking for potential employees with a certain skillset, and these students are looking for companies of the highest caliber with meaningful work.
But for others, the big names either don’t hold as much allure, or they have their hearts set on something else. Whichever the case, some students find themselves recruiting off campus in a situation that more accurately replicates a job search, outside the bubble of Kelley recruiting.
Sumedha Makker, MBA ’17, came to Kelley with a desire to change careers and a passion for fitness. When she decided to get her MBA, combining the two was non-negotiable. She landed her dream internship with Glanbia Performance Nutrition and had an incredible summer working in an environment she loved… so how did she do it? At the core, there were two things Sumedha did that made her efforts a success.
It started with using her resources – she first reached out to Ray Luther of the leadership academy, and he provided her a connection who had previously attended Kelley. She was also proactive in her search. Using the powers of LinkedIn, she discovered she had a mutual connection with the CEO of Isopure, Chris Hickey. She reached out to her former classmate, and he introduced the two.
The self-identified factor that made Sumedha most successful in her job search was her genuine interest in Hickey and the company. When she talked to Hickey, her only motive was to learn about his career and how he got where he was. She knew that they didn’t have a program specifically for MBAs and wasn’t expecting it to turn into anything. During the conversation, they connected well, and her passion for fitness shone through. Hickey liked her so well that he connected her to the human resources department at Glanbia, the nutrition giant who was in the process of acquiring Isopure.
When she arrived at Glanbia, Sumedha says it was the MBAs within the organization who helped create the norms and expectations for the position. Looking back on her time there, something she wishes she had done differently would be to sit down and have a formal conversation before jumping straight in. “I ended up working a lot over the summer, which was great, but by the end, I was exhausted.”
For others looking to recruit off campus, there are a few qualifications Sumedha would give. First, be okay with not knowing what to expect. Most companies don’t know what they’ll be hiring for as far out as companies who specifically set out to hire MBA’s. There will be extra waiting time and likely a lack of organization. The extra waiting applies on the back end as well; these companies participate in more of a just-in-time strategy, so you have to be okay with not having a full-time offer when it’s all said and done.
She would also advise students to feel like they are able to negotiate. “It’s challenging when it feels like the company is doing you a favor since they don’t normally hire for MBA-specific roles, but balance that with the fact that you are bringing value to the company and should be fairly compensated for it.”
In the midst of the search, it’s easy to put those blinders on and focus on the task at hand. Resist that temptation and use your resources – particularly those within GCS as the launching point for your next career move. Kendell Brown serves as the associate director of alumni relations, offered to all Kelley alumni at any point in their career. Reach out to her for more information or set up an appointment.