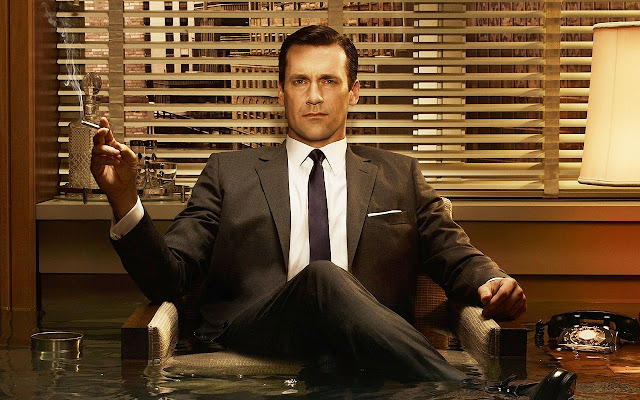 The ability to inspire and foster teamwork through writing is a trait of great leadership. Students in the Kelley MBA Leadership Academy, in collaboration with the Gotham Writers Workshop, have produced a series of blog posts to demonstrate these skills.

Don Draper was a big part of my life for several months while I powered through eight seasons of Mad Men on Netflix. The drama of his messed-up personal life made me cringe on a regular basis, but I loved watching him at work. Whether he was motivating employees through means of unnecessary force or delivering a solid pitch to potential clients, I loved every minute of it.

Although I could probably write a novel titled, “Things to NOT do like Don Draper,” there are some powerful lessons and words that he delivered that have helped me become a better leader and motivator.

“If you don’t like what’s being said, change the conversation.”

I like this for many reasons, the first being action. How many times can we look back at situations in our careers and think of how we would have done things differently? The hard part about this is that we probably knew at the time that we should have taken action but instead settled for complacency.

Returning to business school was a difficult career decision, but looking back it was one of the best I have made. As I look back now it was a surefire way to “change the conversation.” I had reached a ceiling at work and wanted to get some official leadership experience. I had numerous leadership opportunities where I performed well, but when it came down to moving into an actual role I was having a hard time with my lack of official experience. (It’s so hard to get out of these circular patterns.) I knew I had to do something drastic, and that is how I ended up in the Kelley Full-Time MBA Program.

“You want some respect? Go out and get it for yourself!”

I remember when I started my first “real job.” I had been through a pretty rigorous licensing period for a couple months and on my first day, I thought I was the bee’s knees. I had a newly minted set of licenses and precisely zero hours on the job. I figured people would be knocking down the doors waiting to get my professional advice. Day 1 … Day 2 … and so on. I talked to people, but I wasn’t being treated like the professional that I certainly thought I was. I realized at that point that if I wanted to make myself better I had to do something to differentiate myself from the other license carrying people in my industry.

Action is the necessary key to getting respect. I had to be proactive and learn about people and put in the work before I could possibly gain respect. As I became more proactive and showed respect to the people that I wanted to be my clients, I became much more successful. Eventually, after lots of action and learning, I had gained respect and people were seeking me to learn how I could help them improve their business.

I want to reiterate that there are numerous things about Don Draper that you shouldn’t pattern your life after, but he was a man of action. If Don wasn’t happy with a situation, he acted. He didn’t complacently sit around and wait for it to change. In our careers and our lives, action is what drives us forward. At the time it may seem difficult to answer a call to action but it will pay serious career dividends in the end.