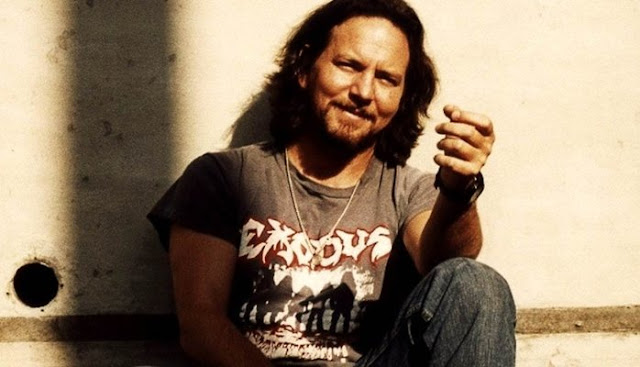 Some people can quote Socrates. Others can quote Chaucer.

Me? I can quote Vedder. Eddie Vedder. As in the lead singer of Pearl Jam, my favorite band for the last 20 years. [And writer/singer on the hit song, Betterman, if you are too young to get the pun in the title.]

While you may scoff at this talent I have to tell you that it’s come in handy a lot over the last two weeks. At work, in professional situations, no less.

In fact, much of the career advice I’ve handed out to students lately can be summarized by some of my favorite lines from Eddie Vedder. Here are a few of the ones I’ve used more than once just since Halloween:

“The one thing about going from the audience to the stage in just three years is that you know how it feels to be down there.”

I’ve had a number of MBA students tell me lately that they love everything about the job offer they want to accept except for the fact that they are required to do a sales role at some point in the early stage of their career. One flat out told me, “I didn’t get an MBA to go into a sales job. I came here to do strategy.” As somebody who’s been in both sales and strategy roles I have to call “bullshit.” If you don’t understand your customers then there is no strategy you can develop which will save your company from bankruptcy.

The best leaders I know all have spent significant parts of their careers in roles that are close to the end users of their products and/or services. No role gets you closer than a sales role. It’s not a “check the box” rotation, nor is it an obligation – it’s a gift. You GET to see how your business actually works, and you GET to hear from customers about how you could do it better. With this understanding, you can actually make smarter strategic choices. You’ll actually know how it feels to be “down there.”

“Do you see the way that tree bends? Does it inspire? Leaning out to catch the sun’s rays; a lesson to be applied. Makes much more sense, to live in the present tense.” (From the song, Present Tense)

Many of our students have had the good fortune of being able to choose between multiple offers as they decide where to work after graduation. Lately it seems that many are stuck between a job they really believe will make them happy and a less satisfying job at a company with a globally recognized name. One recently shared with me, “I love the work I would be doing at (Company A) – it’s as close to my dream job as I think I can get. But it’s a small company and (Company B) is one of the best known companies on the planet. I just worry that if I decide I want to do something different in 3-5 years that (Company B) will look better on my resume.”

I get where this student was coming from – to some degree our personal brand is shaped by the brand of the organization we work at. But after our conversation, this student did end up deciding to go with their dream job. While I have a lot of reasons why I think this was a good decision, the one that stands out to me the most is that you can’t make career choices by overweighting the future. You need to be happy with your job, and your life, today. I don’t fault anybody who wants to prepare for the future, but in situations like this the future is almost purely hypothetical – this student could just as easily say that he could see himself at Company A for 30 years. The reality is that he wanted to be happy with his work this year. And that’s the right attitude for any graduate to have – take the job you know you’ll like. You don’t know what the future holds – it makes much more sense to live in the present tense.

“I don’t know what this means, it doesn’t mean anything … there’s too many bands . . .” (From the 1996 Grammy acceptance speech for Spin the Black Circle)

When Pearl Jam won the 1996 Grammy for Best Hard Rock Performance, the aforementioned line was how Eddie Vedder started the band’s speech. In a subsequent interview he explained that he has no idea how people can judge art – there is no best song, best painting, or best book. There is only the song, painting, or book that feels best to each individual person.

Similarly, there is no “Best MBA Job”. There are no awards for getting an offer from Fortune 10 Company for a reason. There is only the best job for you at this point in your life, and that’s true for each and every student.

I say this because twice lately I’ve had good conversations with students who felt a bit dejected by not getting what they felt like was the “best job on campus.” In these cases the “best job” was defined by the fact that they believed the student community held it in higher esteem than any other offer on campus. (The fact that these two students were each focused on a different company is an irony that is not lost on me, nor did it come up in my coaching.) Neither felt the “best job” they were referring to was a particularly good fit, but they were using it as a measuring stick of their personal value relative to their classmates. It was about competition to them, and they felt as though they lost.

Except that they didn’t lose. Each had offers that they really liked. In fact, both felt that they would probably have taken the offer they had over the “best offer” because the work was more in line with what they wanted to do. They just wanted to be able to say they “won”. (Which is not how the MBA job market works anyway, and I have a whole lot of thoughts on this approach that I’ll save for another column.)

There is no best job. Not here, and not anywhere. A “prestigious” offer that you don’t want doesn’t mean anything. There are too many great companies who employ wonderful people who do fantastic work. The pursuit you should focus on is to find the best job for you, and appreciate that it will be different than the best job for your friends. There are just too many jobs out there to measure yourself by other peoples’ standards. Do what you love, and be proud of that.

So maybe Eddie Vedder isn’t Shakespeare, but the man understands life. I have appreciated having access to his wisdom, and would love to hear from you about who you have found inspiring lately.

“MBA Career Advice from a ‘Betterman’” was originally published on Linkedin Pulse on Dec. 1, 2015.